In this article, I will guide you through step-by-step how to build a dressage arena.

If you are wanting to build a dressage arena yourself, or simply want to understand the process involved and the decisions you will need to make, this guide is for you as I take you through step by step our arena construction. I will explain the mistakes we made, and the considerations you need to make to get the dressage arena of your dreams.

Please note there are many ways to build a dressage arena, and this is by no means a definitive guide. I am certainly no arena expert. It is simply the process we took and the lessons we learnt. Take what you feel is most relevant to your situation and apply it as you see fit. What I can tell you is that we are thrilled with the end result of ours. Here is how we did it.

How To Build Your Own Dressage Arena

I grew up dreaming of having an arena in front of my house. We had recently purchased land and were about to build our house on it. It made sense to put the dressage arena in at the same time, to utilize the heavy equipment that was to be there anyway for creating the level construction pad for the house. 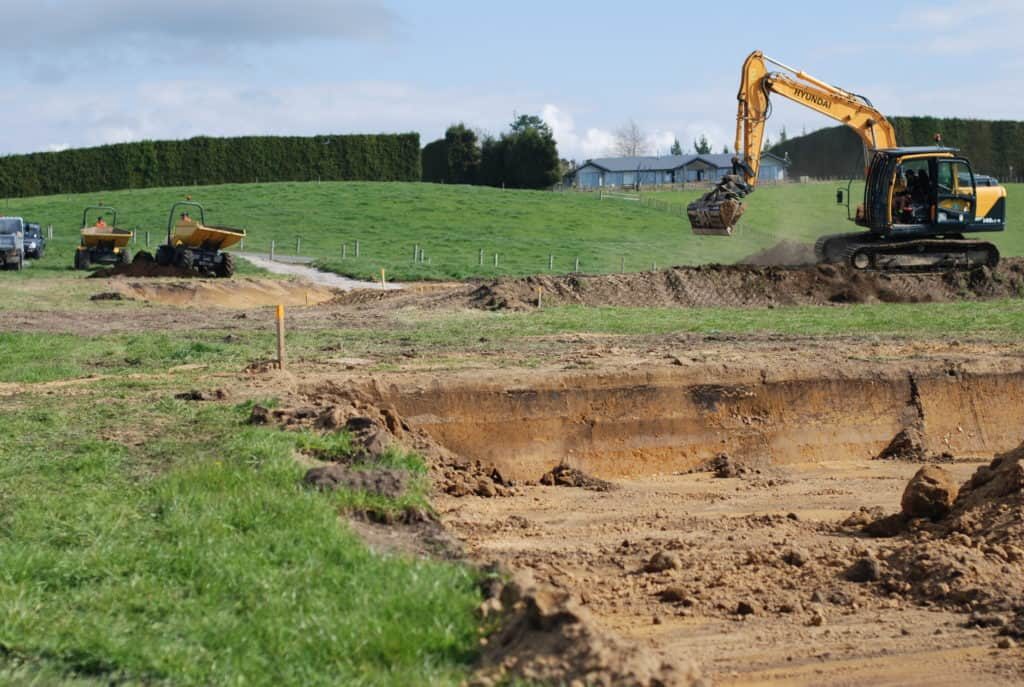 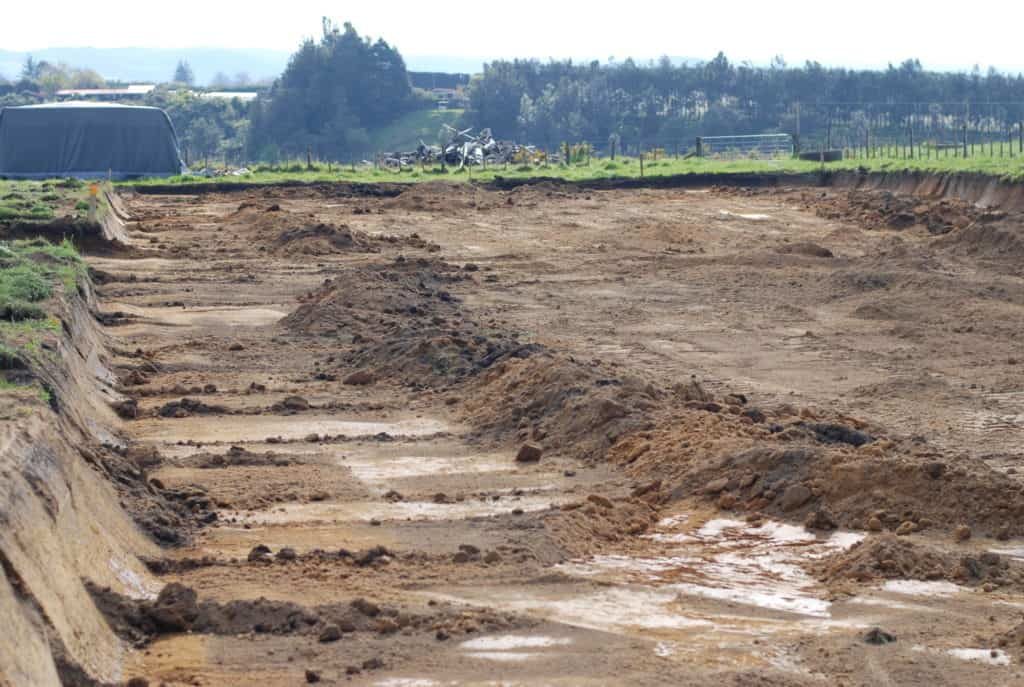 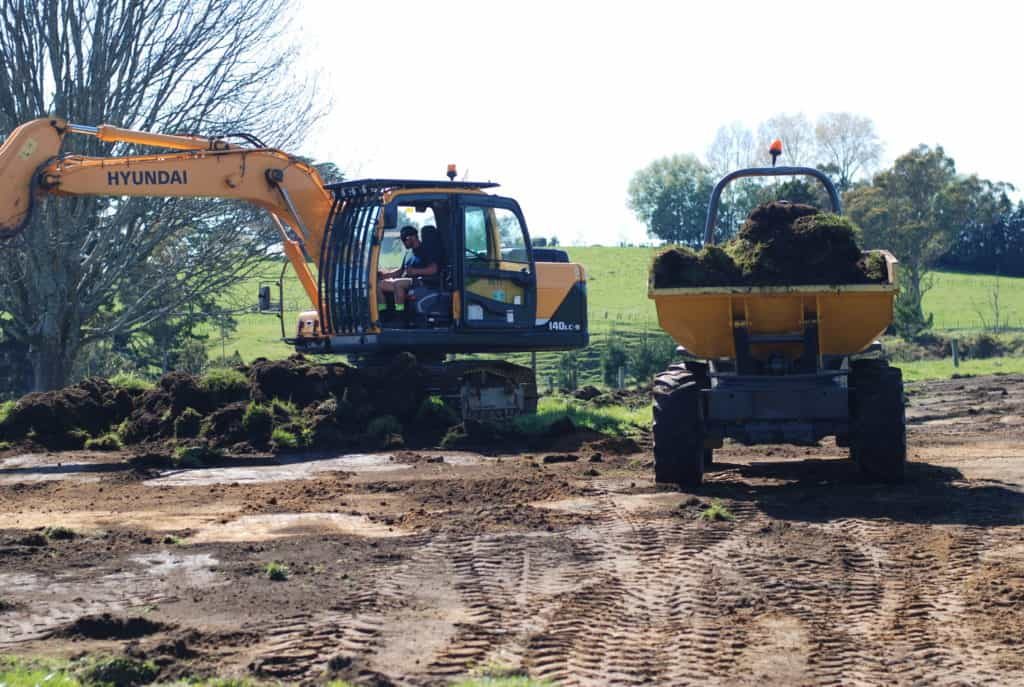 The first big consideration is the shape of the dressage arena, and it’s drainage. These go hand in hand. The natural fall of the surrounding land has to guide your decision-making and how much room there is. Because how the arena will drain away water is one of the biggest considerations you need to be aware of.

The standard dressage arena size being 60 meters x 20 meters, so this was what we aimed for. Smaller arenas are often used when building with limited space, so as much as I could I wanted to get my arena 20 by 60 to have the ideal dressage ring for training in.

There are a couple of different shapes your arena can take…

1 – Road-like camber – The highest point of the dressage arena is in the middle, and it slowly slopes down to the edges of the arena. The water flows to the sides and out, versus sitting in the middle.

2 – Single slope – The dressage arena itself is completely flat, but tilted on a slight angle, either width-ways or long-ways (or even both) to allow water to drain from the area.

How to decide which is right for you? The look of it is a consideration. We chose the camper, with a slight single slope to the lower side of the land. But also think about where the water is naturally wanting to flow on your land, and allow for this where possible to make drainage of the arena easy. 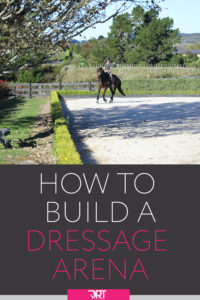 You will need the use of a laser level to know exactly what the heights are, so you know that the water will drain. A simple eyeometer test is not good enough. Your eyes can be surprisingly deceptive!

Having a raised dressage arena that sits above ground height means that the water is guaranteed to drain off the arena itself. However we didn’t like the look of this, plus it would involve more earthworks and preferred to have the arena to be the same height as the surrounding land. This meant we needed to be more precise with our drainage. We will cover this soon.

Excavator/Digger – To pull out the bulk of the top soil and clay until getting to the level height that we wanted our dressage arena to be, a digger was definitely the best option. Using a bobcat at this stage would have take much longer, and when you are paying $100+ per hour for the machinery and driver, you want to be efficient with your time! You can see in the photo that some sections of the land has been cut down by about 1 metre (3 feet). This is a large volume of dirt to be moved, that a bobcat would simply take too long to do.

Bobcat – Once the bulk of the dirt was removed, the bobcat was the best machinery to get the flat or cambered clay base at the exact right heights. A bobcat with a great driver can achieve a precise finish quickly. 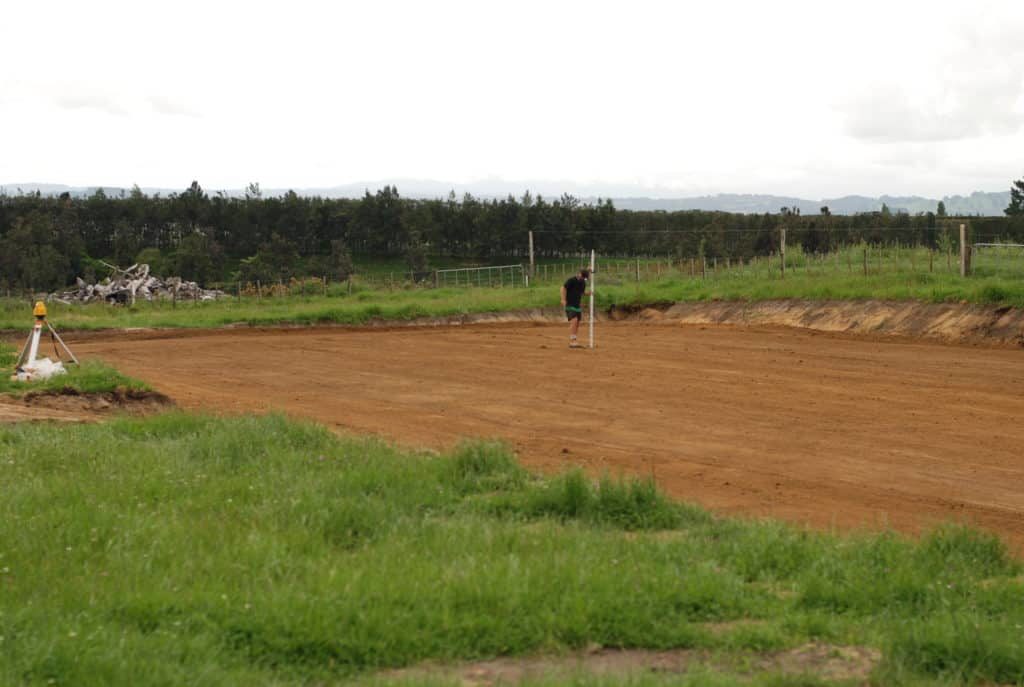 Once the clay base was prepared, it was time for us to consider the edging and what we were going to do with the sides of the arena.

I wanted my dressage arena to have a nice timber edging with a hedge around the outside and arena letters. To do this we used ground treated timber on the bottom rail and normal timber on the top. This will prevent the wood from rotting. We also used screws instead of nails because as the timber dries in the sun it wants to warp. Often nails aren’t strong enough to prevent the twisting, so we used long screws on all our rails and then painted it black.

Truck access during construction is important. You will save on freight costs if larger trucks can access your site, so if you have a gate, be sure to make it wide enough for a truck and trailer to be able to enter your arena with ease. We had our entrance to arena down the long side as this is where it naturally suited our property layout. 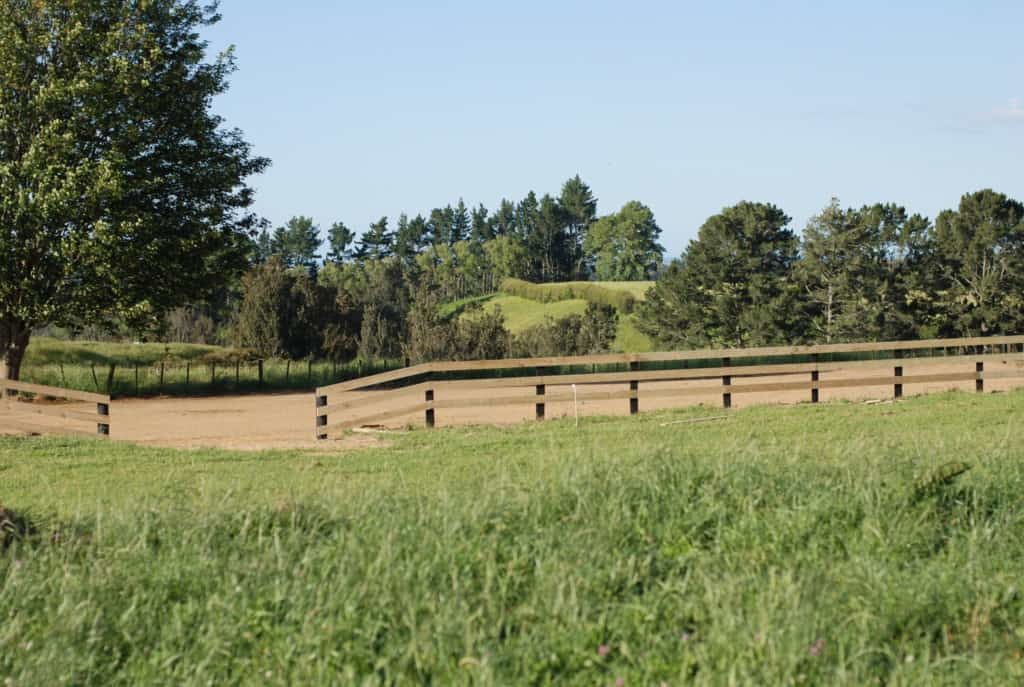 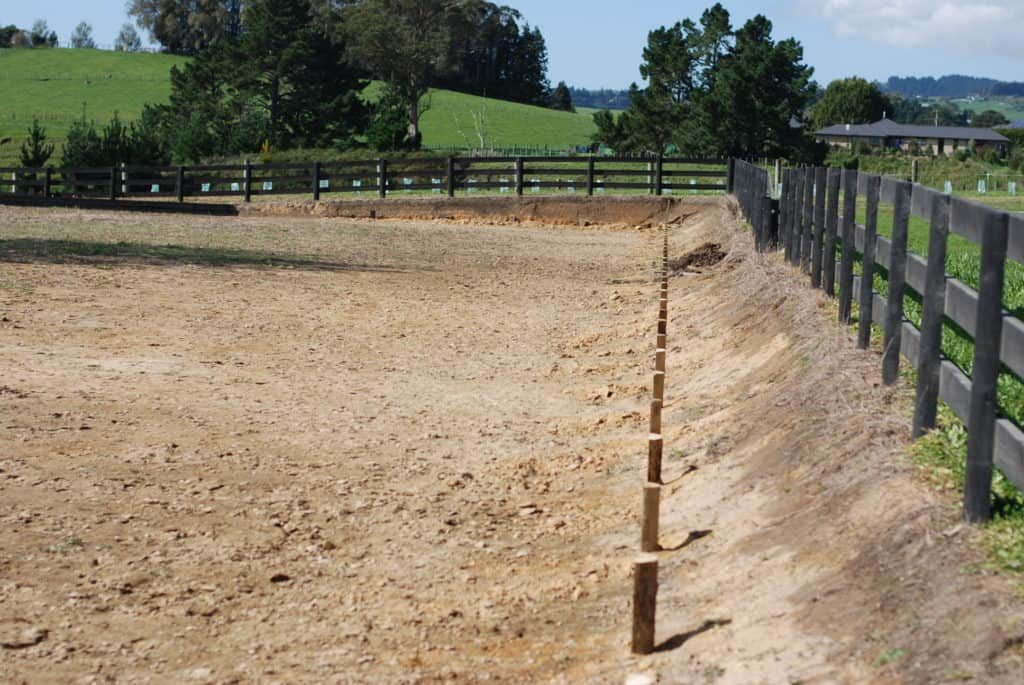 Getting your base fill layer down

The job of the base fill is to make a hard level surface to support the fill above that the dressage horse will schooling on (what I’ll call the footing layer). It was this base layer that caused me the most confusion in my research. I found there were lots of different opinions as to what was best. Ask around and find out what others have done where you live. It may also depend on what is available in your area.

The key point is you want a layer that compacts to a hard base that doesn’t absorb the water like a sponge. The water will drain down through the top footing layer then hit the hard layer and drain out of the arena according to the cambered or sloped fall that you have. If you don’t compact this base layer, it could get churned and mixed up with the footing layer, creating a big soupy mess once it’s rained and then ridden on!

We used a pumice base, getting approx 80mm deep across the surface of the arena. This equaled 4 truck and trailer loads. It’s amazing how much material is swallowed up into an arena. You don’t realize it until the trucks start turning up and one load barely makes a dent! 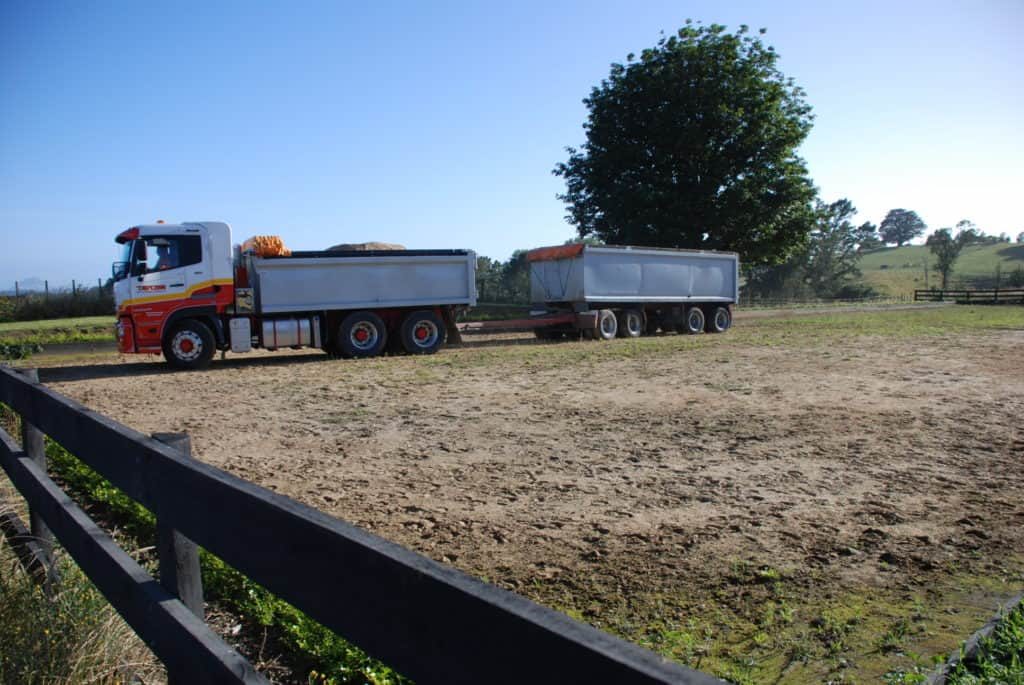 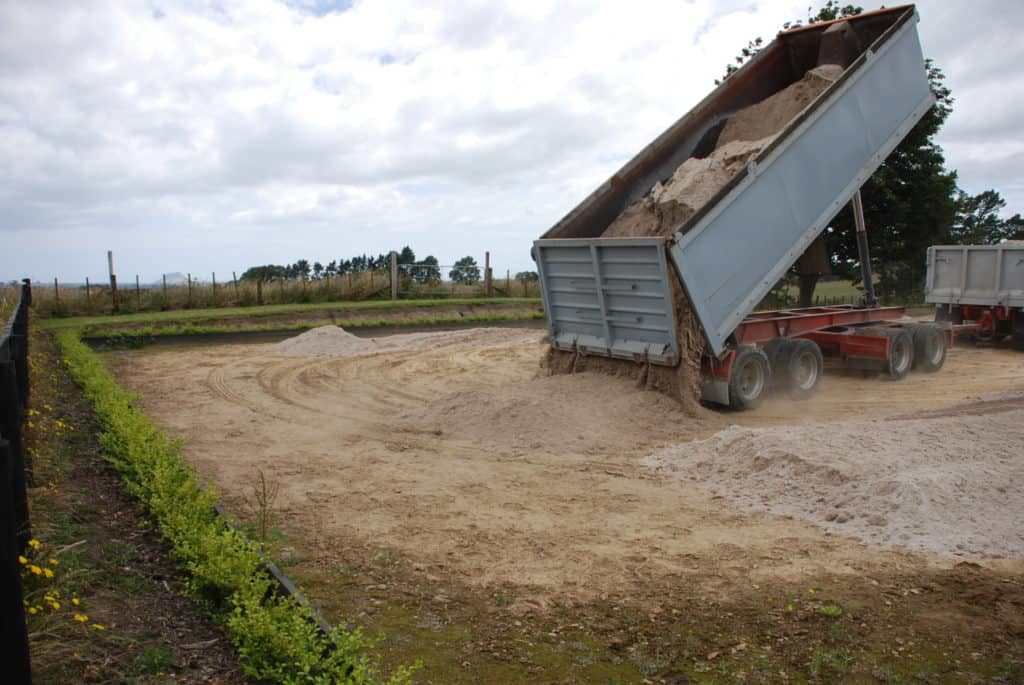 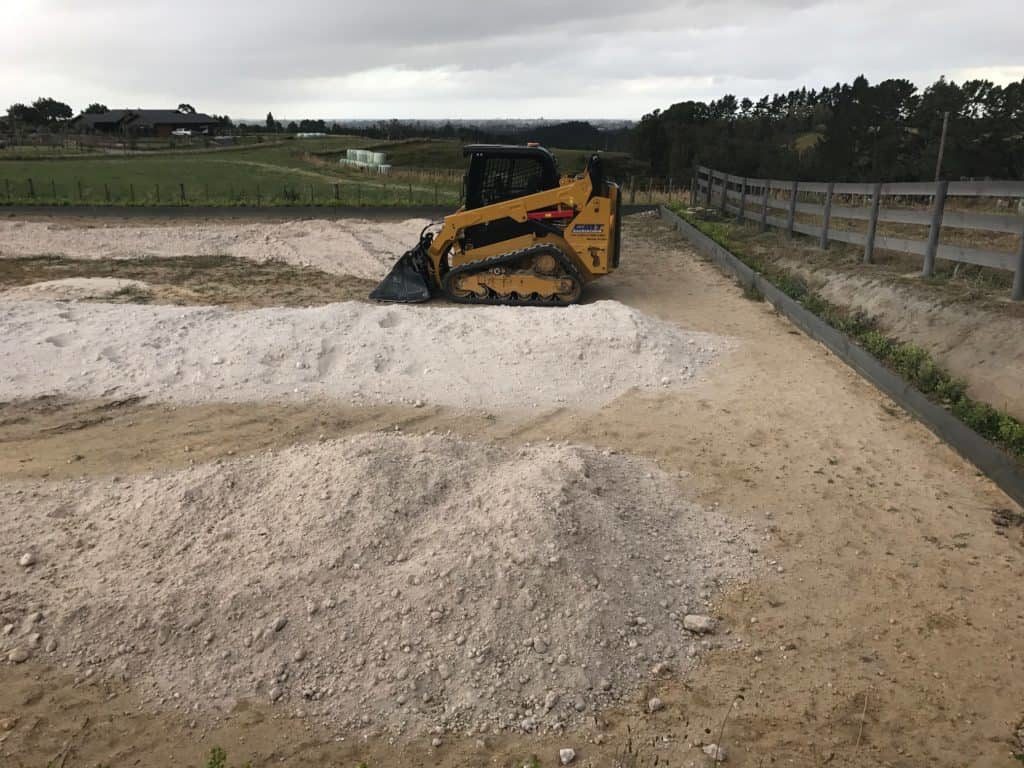 Compacting the base layer, Making it like a road

As emphasized, a crucial part of the arena is having this base layer hard. It needs to be built like a road. So once the bobcat had spread out our pumice base layer, making sure to keep the slight cambered slope down the center line, we hired a steamroller and spent half a day rolling over it until it was rock solid.

There are a few different options with what type of material you can use for your top footing layer.

Sand – Sand comes in a variety of shapes; the granules can be sharp and angular, or they can be rounded. Beach sand is not what you are after. This type of sand doesn’t bind together and will be too soft to ride on. Instead, you want sand that binds together and is angular in shape when you look at it instead of being round. This provides a firm, yet forgiving surface for the horse. We used No.2 sand which seemed to be the consensus of the best material to use locally. The No. 2 is the granule size of the sand, so it is a bit larger and coarser than fine-grained beach sand which would be graded as No.1. We used the same amount of sand as we did pumice. So this was again 4 truck and trailer loads with the aim of it being 80mm all over the arena. We got the bobcat driver to again spread this footing layer of sand around, keeping the same camber shape.

Shredded Rubber – is an optional extra you can go for. I have ridden on arenas that use shredded rubber as the top footing layer. Generally the shredded rubber gets put on top of the sand footing layer, so this is an added expense. But the benefits are that it can prevent the sand from blowing around in high winds, and it also makes the surface more springy for your horse. Some people also prefer the look of the black rubber instead of white/grey sand. We didn’t want the added expense of this (but may in the future look into this), plus my husband had grand visions of the dressage arena being multi-purpose for playing beach volleyball, or beach cricket on. He hasn’t played any of those sports on there yet though lol.

Fibre – then there is the option of a fibre top, admittedly I don’t know much about this or its availability locally. What I do know however is that many people rave about fibre surfaces and its huge overseas, so this maybe something we add on later as the current surface ages. 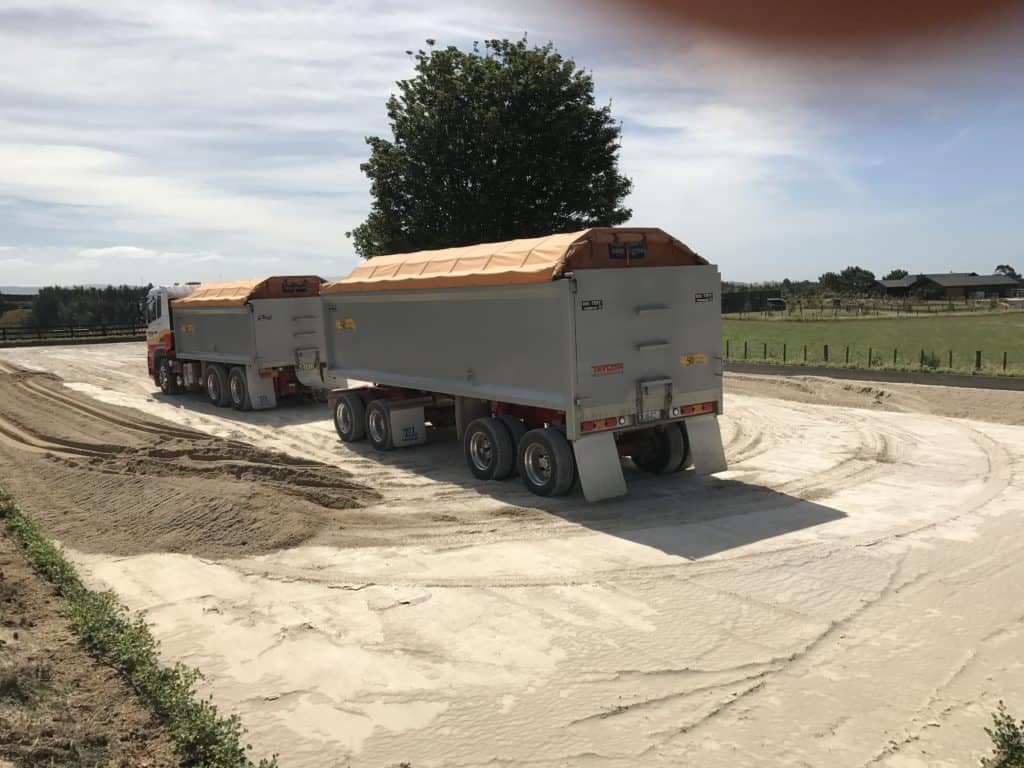 It took us 1 year fom the time we cut our dressage arena area to the time we filled it with pumice and sand. This time delay meant we could watch where the water drained in heavy rain, and see if there was any pooling anywhere. As long as there was no pooling then I could ride on it. I also spent this year putting in plants around it. I chose Buxus Microphllya, as it is resistant to the buxus diseases we get here. 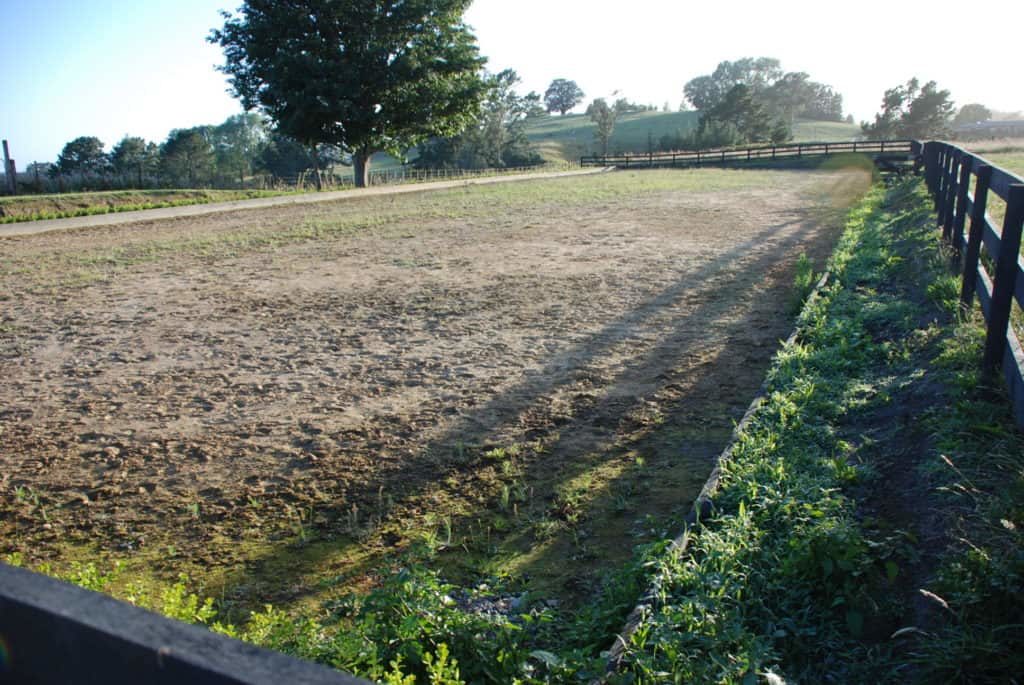 The Cost To Build Our Own Dressage Arena

To be honest I don’t have an exact cost of the dressage arena build, because we cut a few corners with using diggers while the house was being done, and we took a year to complete it. As a rough estimate I know it was more than $5,000 but less than $10,000 all up. Bearing in mind my husband did all the edge building and we hired the rollers to drive it ourselves. Building a small dressage arena may take up less space and materials but at the end of the day the 20 by 60 arena is what most dressage test competitions use, so I am so grateful to have this available at home and to of had the space to be able to put this in and of course a very handy husband 😉

My next wish is to add arena mirrors down the short side of the arena to help me stay on track with my schooling. 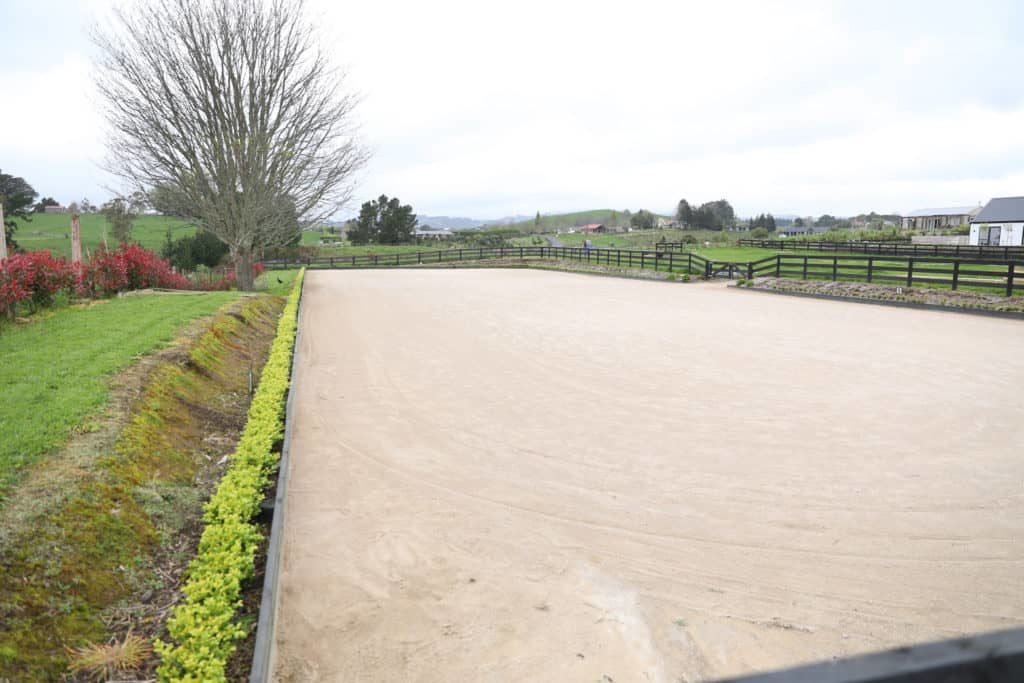 I hope you found this useful. Like I mentioned, there is more than one way on how to build a dressage arena. And the materials used may be very specific to your area. So ask around. Visit other people’s arenas and get local knowledge. This is what we learnt in the process of building this arena ourselves, and we couldn’t be happier with the end result, even if it did take us a year to complete it :). 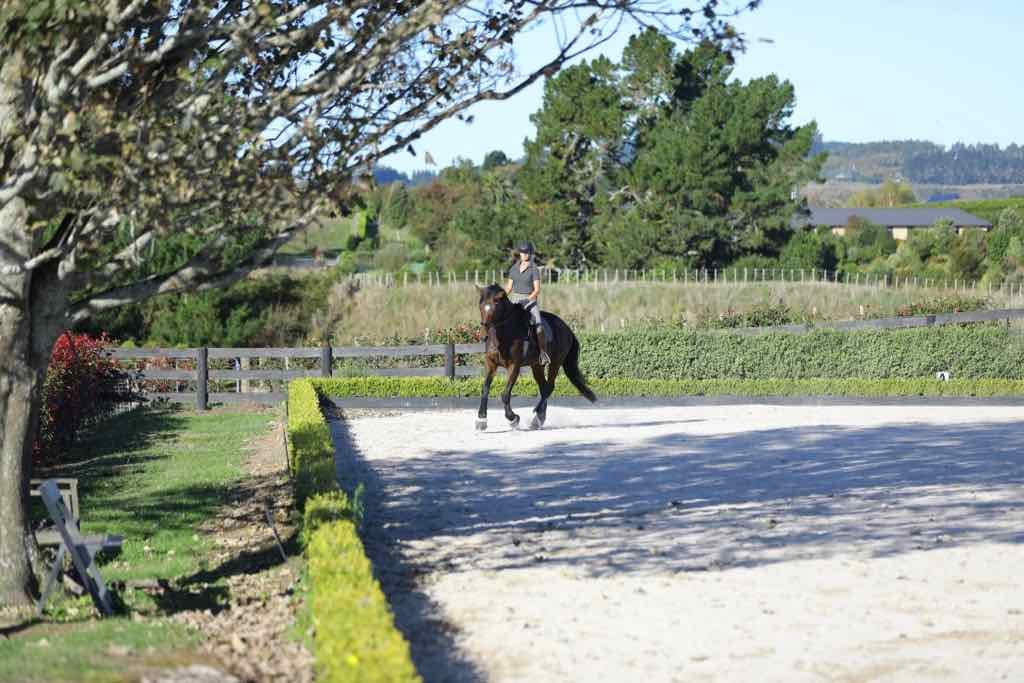 Here are some other articles you may find useful to help you on your dressage journey.

What Is Dressage And How Do You Get Started

What Is The Dressage Pyramid of Training